Gundam is a robot anime from Japan made by Sunrise directed by Yoshiku Tomino, drawed (famously) by Hajime Tatoki. The first Gundam was aired in April 7 1979, the show was still continued until now. The picture shown on left is the Gundam final shot, this was the famous scene when Gundam
shot the Zeong head in the last episode. 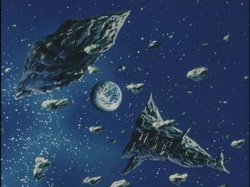 THE ONE YEAR WAR
The Principality of Zeon launch an independence war between the Earth Federation. The Zeon launch a surprise attack, with adding G3 Gas to inhabited colonies, the Zeon attempt to launch Colony Drop, dropping colony from earth sphere, causes half of human population lost. As the Zeon invade Earth, the Federation launch project V/ Operation V. The operation V is a secretly produced by Earth Federation, these are, RX-78 Gundam (piloted by Amuro Ray), RX-77 Guncannon and RX-75 Guntank, these mobile suit is stored in the newly Federation battleship SCV-70 White base. The Final battle takes place at Zeon A Boa Qu (the picture is the wreckage of the A Boa Qu) this battle causes the death of both side general, Degwin Zabi (Zeon leader) and General Revil (Earth Federation General). This battle is where  the White base and the Gundam was Destroyed (including A Boa Qu) but the crews survived. After the final battle The One Year War ended.

BATTLE OF ODESSA (Historical Battle)
The battle took place in January 7 U.C 0079. The Federation launch an attack to Zeon mining facility on Odessa (Zeon supply network) the battle took 2 days, then the federation is victorious, but sadly the Zeon have enough supply to destroy Federation heart, Jaburo. This battle is also where colonel M'Quave killed by Amuro Ray. 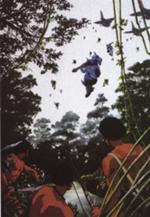 BATTLE OF JABURO (HISTORICAL BATTLE)
November 29 U.C 0079, the Zeon have finally found the main entrance to Earth Federation base Jaburo, in the same time the white base have finally arrived to Jaburo. The Zeon invade Jaburo, the Zeonlaunch a full scale attack by launching,  Zakus, Doms, and goufs from GAW attack carrier. The newly produced GM's (newest federation mass produced mobile suit) were launched to prevent the Zeon destroy the main base. The newly produced Gundam RX-78-6 Mudrock launch to defend Jaburo. Meanwhile Amuro duels with the brand new Char Z-Gok, it end up Char is defeated, the Zeon fallback and the Federation was
victorious. Gundam Lost war chronicles, and Gundam Climax U.C also takes place in the battle of Jaburo  OPERATION CEMBALLO: After defending Jaburo The Federation launch space fleet to Space fortresses Solomon, but they walked in to a deadly trap...... 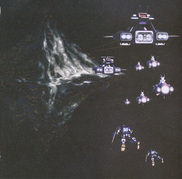 STARDUST MEMORY UC 0083
The Stardust operation was created by Delaz Zabi, the true meaning of the operation was to expose the corruption of the Earth Federation, so the Zeon could rule the earth sphere, there are 3 phase on the Operation Stardust
The Zeon found that the Federation have produced a nuclear weapon armed Gundam, Gundam GPO2A, The Zeon send out Anavel Gato infiltrate Torrington base where the gundam was stored. Gato was successfully captured the Gundam and escaped, but he was interrupted by Gundam GPO1 piloted by Kou Uraki, but Gato was managed to escaped because of the Zeon special forces, 2 weeks later Gato is still pursued by the Albion forces, (Albion is the newest federation battleship, successor of the white base), but then Gato escaped to Australia with a submarine
The Gundam GPO2 was successfully deployed to space, Gato along with Cima Fleet, launch to Konpei Island (New name of Solomon, the name was given from the Earth Federation when they captured solomon), before they attack Delaz gave a speech to the earth sphere, then Gato Fire the nuclear, before he fire, he said: "For the rebirth of the ideals of Zeon. for the success of the operation stardust! Solomon i have returned!" The nuclear explosion destoryed the federation salamis fleet, after firing he is intercepted by Kou Uraki with his newly Gundam GPO1 FB, the duel caused the destruction of their Gundam, but they managed to survived.
The final phase of the Operation Stardust, their final objective is to drop 2 colonies to earth, the Earth Federation manage to destroy the Zeon forces including the Delaz Fleet, thanks to the newly GPO3 Gundam and the Dendrobium able to destroy the Cima fleet, in this phase, Anavel Gato and Delaz were killed, but even the Zeon are defeated the Earth federation aren't able to save the colonies from falling to Earth, then it lead to the next War the Gryps Conflict

GRYPS CONFLICT
After the stardust operation, the earth federation become corrupt, the so called 'Elite Forces' of the Earth Federation become a private Organisation. People are very against the Titans, people start to create riot, meanwhile in Side 1, the citizens start making riot to disband the Titans, the earth federation unsuccessfully calmed down the riot. The titans take over the earth federation, they eliminate the riot in Side 1 with G3 Gas which was disbanded in the One Year War this enraged and frighten people in colony and also enraged half of Federation, the Earth federation officers start to create a group called A.E.U.G (ANTI EARTH UNION GROUP) founded by Blex Forer. The organisation consist of ordinary people, Earth Federation officers (veteran, soldiers, captain) even the Zeon veteran. When the Titans know this, they start to exterminate the Anti Federation's. With the help of the Anaheim Electronics they manage to create their own Mobile suits, such as Rick Dias and Nemo, they also steal mobile suits and ships from the Titans.

Side 2, also called as Green Noa, a group of A.E.U.G attempted to stole the newly built 3 Gundam units by the titans, the RX-178 Gundam MK II. On the attempt of stealing a young boy named Kamille Bidan stole one of the Gundam Mk II units, later on the AEUG success fully stole all the Gundam MK II units, on their battles against the Titans, Kamille Bidan reveal himself as a New Type, on a mission to intercept the Earth Federation HQ Jaburo (Have been take over by the Titans) they've run to a member of Karaba, he is also known as Amuro Ray from the One Year War, he joined fight alongside his old allies in White Base, Hayato and Kai Shiden in Garuda-class Audhumla. As the war rage on, Kamille Bidan receive his new Gundam, the Zeta Gundam, in the war Kamille lost many people he cared and cherished, he become stronger as Amuro Ray did in the One Year War, more obstacles come, the new reborn Zeon, the Neo Zeon led by Haman Karn, the 3 faction battle each other. In the final battle AEUG successfully defeat the corrupted Titans, but they lost many brave soldiers, and also they greatest pilot Kamille Bidan suffers in a psycho-stat